My name is Ivory. In Late August of 2017, I found out I was pregnant. My Boyfriend and I were very excited. Everything seemed so perfect, we had our own place. Working Good Jobs, it was the perfect time. We went to my first Ob /Gyn exam Mid -September, We learned we were 5weeks pregnant. Our little Honey bee heart beat was already fluttering strong. On October 31, 2017 I had my 10-week check- up, Our Honey bee was growing strong. Upon heading home from my appointment, gushing over our little one’s Sonogram pics and, all the cute little kids running around in the costumes in the neighborhood. I received a phone call from my Full-Time job letting me know that were firing me.

As you can imagine I was very upset, back in September I let my boss know I was pregnant. They didn’t give me a real reason as to why they were firing me, they just kept saying it wasn’t going to work out. I had been there since April of that year, why had they wait 6 Months to tell me it wasn’t going to work out. My Boyfriend said not to worry everything will work out; file for unemployment. The first week on November, we woke up to no heat, no hot water. We called our landlord to come investigate the issue. A week went by before anything was fixed, despite My neighbors and my calls to the department of health. That weekend my boyfriend got laid off, because his company was doing downsizing.

We started to question our faith and Maybe God was punishing us for trying to have a baby out of wedlock. We made an appointment at the Planned Parenthood to abort. We were both torn and hurting on the inside. We argued about every little thing days leading up to the appointment. That morning we drove out to Montclair, NJ. We cried the entire ride there. There were people standing outside as we walked up, but I figured they were waiting for someone to come out. As we walked into the clinic, the waiting area was filled with women, some with boyfriends, some with friends and some with their Mothers. My nerves were all over the place, I didn’t know my left from my right at this point. I started to get really nauseous in the pit of stomach, I ran out of the waiting room. My boyfriend followed me, I looked at him and said “We can’t do this” He agreed. We walked outside and saw the familiar blue van with the white dove, I thought maybe I was seeing things when I saw a woman that looked like my mom and then I heard her voice, we were trying to walk fast to the car but it was too late. She spotted us.

IT WAS TIME TO COME CLEAN we told her everything as we sat in the van, I told her I felt like God was punishing us for having a baby out of wedlock. She said “Don’t ever doubt your faith. We are all human we make mistakes but, God loves you both and that baby”. We got a sonogram and were able to hear our Honey Bee’s heartbeat for the first time. Guilt set in hard, I cried, to think we would’ve given that moment up for hard times.

Fast Forward to Christmas 2017, we made the announcement to the rest of the family. I was 4 months pregnant. Excitement was all around. Everything seemed to be getting back to normal… Right? Wrong. New Year’s Day I got a phone call from my little sister; our father was on life support. He suffered a heart attack and flat lined, He was in a coma. I couldn’t process what she was saying; though we had a strained relationship, I wasn’t ready to lose a parent. On January 11th at 5:30 A.M. my Dad passed away.  On January 19th    my siblings and I laid our father to rest.

As if things weren’t hard enough, my Ob /Gyn dropped me because I missed my appointment to go to my dad’s funeral. I received a very rude letter in the mail. Forced to find another clinic I got a referral for the best doctor in the world in my opinion Dr. Merriam at Comprehensive Women’s Health of Englewood, NJ. Shortly after things seemed better things got bad again My landlord wanted us out after he illegally raised the rent without a new lease for us. I was in and out of the hospital with severe back and chest pain.

Fast forward to the end of March; we had to be out in less than a week. Pregnant, No Stable Jobs, My Dad Gone, Constant pain…. Could things get any worse? MOVING DAY; everything was packed and ready for storage. A friend of ours made arrangements for us to stay with her Mom for two weeks. Well that didn’t last long. Thursday before Easter My Mom came and got me to stay with her and My Step Dad.

April 11th 2018, I fell Ill, I couldn’t pinpoint what was going on but I didn’t feel right. That evening my mom drove me to Englewood Hospital where they checked my vitals. My Blood pressure was 158/101 I’ve never had blood pressure issues. We couldn’t understand. I called my boyfriend to let him know they were going to admit me for observation. My Doctor came in the next morning with Bad News, I had severe preeclampsia. I wasn’t going home until they delivered the baby. They gave me a Surgery Date for March 22nd. My original Due date was June 10th, I was beyond scared and nervous.

I put my trust in God that He would make everything okay. I learned that our baby was no longer growing.  My placenta was poisoning my body and my kidneys weren’t producing enough fluid. April 13th was My Birthday, I celebrated with a slice of Cheesecake Factory cheesecake. Yummmyyyyy.  From the Evening of the 13th to the 16th I was on a liquid diet because of the preeclampsia, and they were ready to take me to surgery any second.

Delivery Day: 6 A.M.. April 17th 2018 I woke up to the Nurse checking my Blood pressure.  It was 202/108. I was rushed over to labor and delivery. I called my Mom, Boyfriend, and My best friend. The Doctors pumped me with medicine to get my blood pressure down. At 10:45 A.M.. I was rushed down to the E.R. I was giving a spinal tap and they started the surgery before my boyfriend could enter the operating room because my pressure started to spike back up from 180/98.

At 10:55 A.M. We heard the best sound in the WORLD Our Honey bee’s cry. Then we heard the words, “It’s A Girl “.  Ari Taylor Craig entered the world as Feisty as She wanted to be. Tears of Joy filled our eyes. The nurse brought her over briefly, 2lbs 11oz of cuteness.  I woke up in the ICU. My blood pressure was still so bad they put a shunt in my arm to monitor it.

I was still very sore from my C-section. I wasn’t able to physically be with my daughter, I was only able to see her through NICU View I camera placed in her incubator. She was beautiful. 3 days almost 4 without being able to physically touch My Little girl.

Hello Blessing:  April 20th, 2018, I was able to hold My Daughter for the first time. I can’t put that feeling into words, the level of Joy is out of this world. 40 days without My Honey Bee Home, May 28th 2018 she was finally able to come home. Kathy personally gave us a Mini Baby shower that we greatly appreciate. Without Kathy, My Mom and Several Sources who knows what would’ve happened.

Fast forward 3months later.  We have a new home, My Boyfriend has a great job , Ari is Healthy. She’s Almost 9lbs and Thriving. 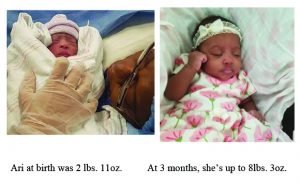