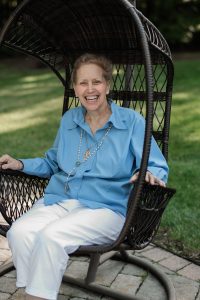 Meet Kathy DiFiore, Founder & President Emerita of the Several Sources Shelters. Kathy Received her Undergraduate Degree in Psychology from the University of Rochester and in 1979, she received her MBA from NYU and is currently studying for her doctorate in Education at the University of Phoenix online.

* 1981 – Kathy decided to turn her own home into a shelter for mothers and their babies. As the demand for her help for pregnant women grew, Kathy made a decision to leave the corporate world and devote herself full-time to helping mothers and babies. She now operates four residential shelters in New Jersey, a national hotline 1-800-662-2678, and “Our Gift of Hope” mobile sonogram center in Englewood, NJ.

* 1984 – Kathy met with St. Teresa of Calcutta on several occasions and has many spiritual letters of guidance from her. Kathy’s work was threatened by a $10,000 fine from the State of NJ for operating an unlicensed boarding house. Mother Teresa, as she was then known, wrote the governor, which eventually helped to rescind the fine and change the NJ laws so Kathy’s work for the preborn and their mothers would become legal.

* 1988 – 1992 – Kathy’s work was honored by President Ronald Reagan at the White House and soon after, her work was honored by the US Congress. Received an Honorary Doctorate Degree from Felician College. Kathy also received a Papal Blessing from Saint John Paul II in “recognition for her years of generous and untiring Fight for Life and as encouragement to go on with the same Christian spirit for years to come.”

*1998 – Kathy was honored by being invested as a Dame of Malta and has received the Malta Silver Medal of Pro Merito Melitensi Award which has also been given to President Ronald Reagan and President George H.W. Bush. She also received at St. Bonaventure University, the Gaudete Award for her continuing work on behalf of our mothers and their babies.

* 1995 – 2008 – Received St. Elizabeth’s College Catholic Woman of Achievement, the Pax Christi NJ Dorothy Day Award, the Dr. Martin Luther King, Jr. Award from the United Methodist Church of Newark, NJ for her work in the inner city of Newark for women and children in need. Won the Abstinence Clearing House Impact Award and had her first research article published in the Californian Journal of Health Promotion and the Mother Seton Award from the SOAR (Support Our Aging Religious).

* 2011-  The New Jersey Senate & Assembly passed a resolution honoring Kathy’s work with mothers and infants throughout New Jersey, poor inner city children who are “at risk” and children who are afflicted with AIDS (in Newark, NJ).

* 2014 – The film Gimme Shelter, featuring Kathy’s work for mothers and babies, was released domestically by Roadside Attractions and internationally by Sony. The film starred Vanessa Hudgens as an abused pregnant teen and James Earl Jones as a compassionate priest. In April, Kathy received the Pope John Paul II “Gravitas Award” to recognize the virtue of Gravitas in her efforts to communicate God’s love through the use of the film Gimme Shelter. Saint John Paul II called artists to a higher order of responsibility because their gift came from God. In May 2014, Kathy received the Christopher Award, which celebrates films that affirm the highest values of the human spirit. On September 11, 2014, Gimme Shelter was honored with a Screening at the United Nations. Kathy wrote two books entitled Gimme Love … Gimme Hope…Gimme Shelter: The True Inspiration behind the Movie Gimme Shelter and the Gimme Shelter Film Study Guide. Both books received a Nihil Obstat/ Imprimatur from Archbishop John J. Myers of the Archdiocese of Newark.